A Special Bond Between Two Women of Words

HICK: A Love Story
The Romance of Lorena Hickok and Eleanor Roosevelt 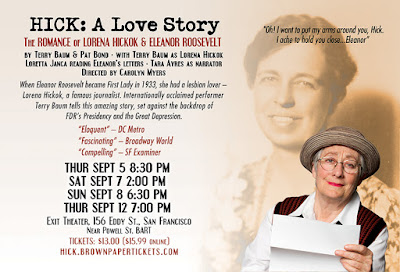 Written and performed by Terry Baum
Directed by Carolyn Myers

“The love that dare not speak its name” finds voice in the letters between journalist Lorena “Hick” Hickok and Eleanor Roosevelt.

Playwright Terry Baum (who first performed this piece in 2014) IS Hick in this show. You’re right there with her in the New York newsroom of the Associated Press in 1932 when star “gal reporter” Lorena Hickok lands the choice assignment of covering the campaign tour of Franklin Delano Roosevelt in his bid for the Presidency.


In a gesture to give advantage to her fellow female reporters, Hick suggests to her editor that it would be a good idea to assign a female reporter to cover Mrs. Roosevelt. Instead, Hick herself is awarded that assignment, thus beginning a relationship with Eleanor that soon grows into passionate love.

Aware of FDR’s indiscretions, Eleanor maintained her position as his wife, and the two gave each other a wide berth when it came to personal matters. Eleanor was key in helping her husband land the Presidency while living as independently as anyone could in the public eye.

Baum dons the floppy hat, baggy clothes, and clunky shoes of Hick, a spitfire of a woman who was gifted with cojones and acerbic wit while realizing that she would always be on the periphery of social acceptance. It is Eleanor who triggers the romance with the reporter, a dream that Hick never imagined could come true.

The development of the love relationship is captured in over 2300 letters that reveal a range of emotion, passion, and tenderness between the two women, from coy fondness to outright “naughtiness.”


Baum bubbles like a giddy schoolgirl who learns that her “crush” is reciprocated. Her joyful exuberance fills the room, and the letter exchange between “E.R.” (Loretta Janca) and Hick suggests a wonderfully intimate inner life of a first lady who was often judged solely on a drab appearance that belied her colorful character. Realizing how deeply human, joyful, and sexual E.R. was is a fresh and delightful revelation.

As if waiting by the fireside for the next chat, the Narrator Tara Ayres colors the sweep of time with snippets of “Happy Days Are Here Again” and “Moonglow” and contextualizes events from the Great Depression to FDR’s inauguration to WWII, all the while highlighting the difficulty of sustaining a discreet bond between E. R. and Hick.


The span ends in 1968, the year of Hick’s death, with Hick trying to decide what to do with the boxes and boxes of correspondence between her and Eleanor, “some of it good and some of it bad.” She ultimately decides to donate all to the FDR archives.

In an innovative and efficient way to establish the different worlds of the two women, the set is literally a pop-up, with enlarged handwritten letters on White House stationery on the left and various newspaper headlines on the right.

The energy of “HICK: A Love Story” is about a timeless and chaotic love that could barely be contained by the conventions of the time, and holds special relevance today. You will be rewarded with a warm and educational encounter with two women of words who briefly shared their life.