Translating the Language of the Heart 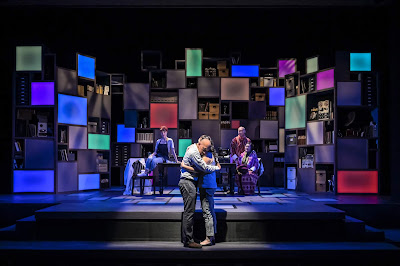 Here’s a sobering fact from UNESCO: of the 7,000 living languages in the world, more than half will be extinct by the end of the century. In urgent response to the dilemma, many people dedicate their lives to the study and preservation of such languages.

In Julia Cho’s “The Language Archive,” George (Jomar Tagatec) is a linguist so immersed in the study of dying languages that he is oblivious to his wife Mary’s (Elena Wright) attempts to communicate. These two are not the kind of people who finish each other’s sentences, and it seems that one's signal is the other’s noise. For example, Mary leaves little desperate notes for George and cries continuously in her unhappiness, while George is befuddled by her actions. How did these two ever get married?


When the last two remaining speakers of the dying language Elloway agree to visit from a far-off and unspecified country, George looks forward to fulfilling his research by capturing their conversation in their native language. He is surprised when his guests Resten (Francis Jue) and Alta (Emily Kuroda), an old married couple, bicker about trivial things in English because, as Alta explains, “it is the language of anger.” Jue and Kuroda are as funny and practiced as an old vaudeville team as they shake up George’s, and our, expectations. Costume designer Noah Marin must have had a lot of fun dressing Resten and Alta in the motley and colorful items of clothing from a far-away land.

George, upset that his study is straying from protocol, tries to steer his subjects toward his ends. The concept of love is brought up, with George fretting in “analysis paralysis” while Resten and Alta define their bond as simply not being able to imagine living without the other person. Cho’s poetric gifts infuse “The Language Archive," illuminating how language gives voice to the heart.


The give-and-take and sad breakdowns of communication form a delicate cat’s cradle among the characters. George thinks compiling a CD of “I Love You” in dying languages will win Mary back, but she leaves him to nourish an unfulfilled longing for her own life and passion. George’s assistant Emma (Adrienne Katori Walters) is his work-wife of sorts and strives to demonstrate her love by learning Esperanto, his favorite language. Torn by conflicting but unexpressed feelings, Tagatac delivers a heartbreaking portrayal of a man who cannot even communicate with himself.


Justifiably exuberant with winning the 2019 Regional Theatre Tony Award, Theatreworks Silicon Valley begins its 50th season with this play. Even though “The Language Archive” has ingredients for a perfect production: superb cast, smooth direction by Jeffrey Lo, an evocative and versatile set (Andrea Bechert), poignant music and sound (Sinan Refik Zefar), it was hard to connect with the characters except for Resten and Alta, who seemed to be the only ones who had self-awareness. The beautiful image of Resten and Alta after death becoming  “two trees whose leaves whisper to each other all day long” lingers long after the play ends, hinting at what real communication is all about.