The Unescapable Prison of Destiny 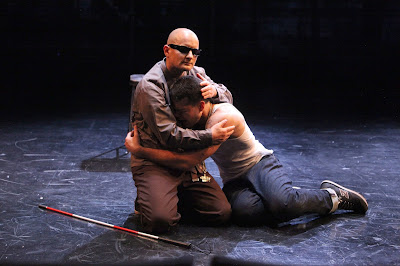 Sophocles’ tragedy about a hubristic king ensnared in a destiny that leads him to kill his father and marry his mother is the template for Luis Alfaro’s Oedipus El Rey, now in a 10th anniversary revival at Magic Theatre.

Brimming with machismo, afire with passion and rage, and studded with vivid (to say the least) urban Spanish idioms, Oedipus El Rey is a powerful journey of a soul traversing the past, present, and future in realms of the physical and mystical to reach a painful self-discovery. Alfaro weaves his own ancient and contemporary Hispanic roots into a complex tapestry of cultural beliefs, expectations, spirituality, and street-survival.

The play opens with men in orange prison jumpsuits shuffling in line. As the heavy gates slam shut, a power dynamic of cutthroat competition begins to play out among the men practiced in the game of survival. “Who is this man?” asks the chorus (Sean San Jose, Juan Amador, Armando Rodriguez, and Gendell Hing-Hernandez) who throughout the play voices ancient wisdom and admonitions of culture and spirit.


The man is Oedipus, a young and beautifully fit inmate who calls himself king. Esteban Carmona presents a visually strong Oedipus with an innocence that doesn’t quite project the ruthless toughness of a cursed man who has suffered his way to power. Oedipus has been protected from birth by the blind Tireisas (a wry and compassionate Sean San Jose) who alone knows the boy’s history and who has come to see him as a son. Because of Tiresias, Oedipus thinks above the fray enough to see himself as a king, and it is this attitude that locks him in the unstoppable train of destiny.

Once out of prison, Oedipus embarks on a journey to power, starting with a fierce standoff with another driver that ends in the fateful death of his father Laius (steely Gendell Hing-Hernandez). Fleeing from the crime, Oedipus finds a place with his uncle Creon (a tough and savvy Armando Rodriguez) who runs a “family business” with his sister Jocasta (played with a timeless sensuality by Lorraine Velez), the widow of Laius. “The dead can get into your head and make you stop living, even from the grave,” she says, in one of Alfaro’s many beautifully rendered lines. In blissful ignorance of their fated reality, Oedipus and Jocasta follow their palpable and vivid attraction into a deep and arousing passion that only heightens the devastating shock of truth.

Throughout the play, the backdrop shifts like shadows on the cave wall in an evocative dreamscape of abstract and floating images. The square floor of the Magic’s northside theater, however, could be used to present more than static tableaux of characters interacting with each other.

Oedipus El Rey is about boundaries that, when crossed, can trigger deadly machismo standoffs as well as the wrath of the gods punishing the defiant, a reality faced all too often by those who must struggle to survive.