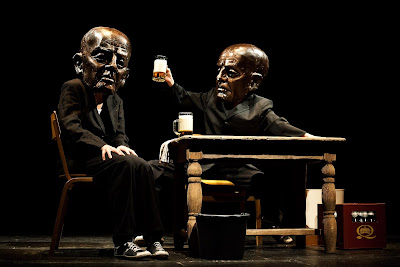 The artistic troupe Spitfire from the Czech Republic gained permission just in time to participate in the San Francisco International Arts Festival with their performance piece “Antiwords.”*

Inspired by Vaclav Havel’s play “Audience” about working in a Communist-era beer factory, "Antiwords" revels in the same absurdist, bird-flipping attitude that Czechs have always maintained under oppression. Menial work will get done, yes, but at a surreptitiously slower pace interspersed with much drinking, complaining, and peeing.

Two lithe, young women wearing matching drab pants, T-shirt and sneakers carry two large paper mache heads. As each vie to catch the eye of audience members, the pecking order is soon established as one is obviously more powerful, but over what? Both women put on the heads, don drab coats, and sit at a small table. They look exactly alike as Man #1 takes control by inviting the other to “have a beer” while Man #2 reluctantly obliges.

Again and again, a beer bottle is opened, a mug is filled to a heady froth, and the order to drink is uttered, because it is “the tradition.”  This action iterates ad absurdum, with the audience sometimes cheering “chug, chug, chug” as one of the performers lifts her mask to down the entire glass. (I was amazed at how quickly the actresses could polish off nearly a case of Pilsner Urquell.) In an environment where all is “shit” and nothing really matters, the only options are to drink or find a way not to, in other words, to comply or resist. 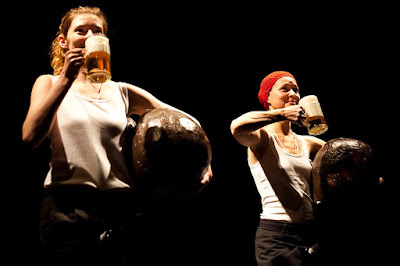 “Antiwords” is a quirky, delightful one-hour show of unspoken but powerful dynamics. The head masks are wonderfully sculpted to indicate an everyman capable of riding a wide range of emotions. The deliberate, practiced and expressive micro-movements of the two women animate each head, reminding me of Czech or Polish animation that tells a story with universal imagery and no dialog. "Antiwords" is physical theater at its best, with shifting power dynamics conveyed through slumped shoulders, shrugs, crazy dances (including a superb moonwalk) and reactive gestures.

Spitfire’s “Antiwords” ends Sunday, Jun 2. While you’re at Fort Mason, check out the other incredible performances from around the globe at sfiaf.org

* NOTE: The San Francisco International Arts Festival is keenly feeling the trickle-down effect of the US political decree that has stalled or denied visa approvals for some performing groups from other counties, leading to an unprecedented need for costly legal help. You can attend the free “Artist Visa Crisis Panel Discussion”  on Saturday June 1, 2:00pm, at Friends of SFPL Bookstore, Building C, Fort Mason. Info: https://www.sfiaf.org/theatre_power_democracy_panel