Keep on Singing..Keep on Dancing 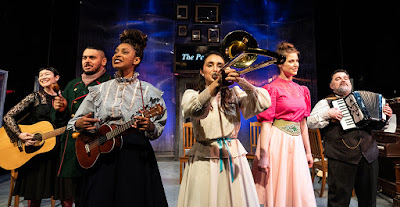 Kill the Debbie Downers! Kill them! Kill them! Kill them off! squeezes juicy berries of absurdity from Anton Chekhov’s Three Sisters into a heady liqueur of song, dance, play..and an accordion! At the Shotgun Players Ashby Stage until April 21, Kill the Debbie Downers..., directed by Mark Jackson and Beth Wilmurt, answers Chekhov’s suggestion to “Have a look at yourself and see how bad and dreary your lives are.”


Three Sisters, like many of Chekhov’s plays, is a study in the stir-craziness of existential cabin fever as desperate characters try to preserve their spirit by living in the past, concocting trouble, or dreaming of a distant and better future without taking action to effect change.

Like the room in Sartre's No Exit, the setting of Kill the Debbie Downers... is an estate living room shrouded in a routine where the same lines are repeated over and over, the same clock chimes again and again, and the same conflicts grow in intensity. The three sisters are Olga (a solid Sam Jackson), the oldest and most pragmatic; Irina (a giddy Gabby Battista), the youngest  who fantasizes about love and the nobility of work; and Masha (a graceful and determined Erin Mei-Ling Stuart), the middle and most sardonically weary sibling. Amanda Farbstein seems to enjoy playing the annoying and controlling Natasha, as Nathaniel Andalis joins in as the quirky and distanced Solyony while Billy Raphael steps in as needed with witty observations as Dr. Chebutyken. We don’t see other characters such as the brother Andrey who has “Andrey’s happy song, it’s not long...” sung by the sisters who encourage the audience to join in. Nor do we see the commanding officer Vershinin who is reduced to a military cap with which Masha holds a conversation.


Everyone living so close together in a loop of reminiscing and annoyances is bound to create friction, so the only outlet is to do something, anything to dispel the dismal boredom such as move chairs around in practiced choreography, play silly games, chide one another, sing songs, make music and dance.


The music is diverse, unique and memorable, and it’s worth it to check out the show’s playlist on Spotify at this link

Kill the Debbie Downers... reminds us to seize the moment and grab as much fun as you can before we die. It’s as simple as that, and I bet Chekhov would have loved it.

Until April 21, 2019
Shotgun Players
Run time is 2 hours without an intermission.

All Photos by Robbie Sweeny