The Great Leap: More than a Game 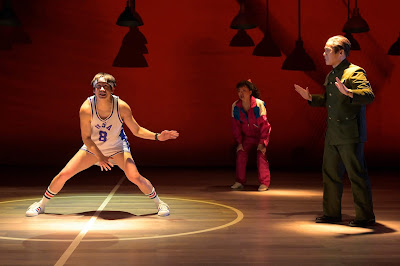 San Francisco native playwright Lauren Yee knows how to spin gold from her Chinese-American roots and weave it into the larger context of cultural history. In King of the Yees (recently at SF Playhouse), for example, she draws on her father’s commitment to the name Yee to take us on a wild ride through current news and ancient lore. In The Great Leap, currently at A.C.T.’s Geary theater, she frames Sino-American relations in the seemingly innocent structure of a rematch game of basketball between the American University of San Francisco coach (Arye Gross) and the coach of the Beijing team (BD Wong) who last encountered each other in 1971.

Set in 1989, The Great Leap seems to be about the world of basketball and basketball fanatics, and that alone is entertaining. But we soon learn that the real game occurs on the much bigger, global arena of politics, historical change, and evolving cultures.


At center court of the action is the 17-year-old Manford (an agile and eager Tim Liu), cocky in his self assuredness of being the best basketball player in the area and intent on joining the USF team headed to Beijing for the rematch. Manford is a Chinese-American kid whose energy seems to keep him aloft. He slips through the players’ entrance on the campus to reach coach Saul (Arye Gross), an almost hyperbolic fountain of crass obcenities and stubborn opinions about the game.  Manford’s longtime neighbor Connie (a down-to-earth and caring Ruibo Gian) is a surrogate sister and point guard of sorts, keeps him grounded. We learn that Manford’s dead mother was an avid Warriors fan and that he has never met his father.


Some of the funniest dialog is between Saul’s brusque interactions with the controlled and subdued Wen Chang, highlighting the difference between American and Chinese demeanor and intention. The two men are playing the same game but with different rules and expectations. Americans win at all costs; Chinese collaborate, or else.


Where Saul aims for the glory of victory, Wen Chang holds to a steady, measured pace to keep within party-approved bounds. BD Won delivers a superbly nuanced performance of a man trying to maintain an external compliance as his heart aches with the pain of opportunities and love lost because of the risks he did not take.

This production of The Great Leap gave me the  same adrenaline rush I get watching  a live basketball game, witnessing the non-stop movement, pauses, and shifts of power. With director Lisa Peterson balancing the emotional and kinetic energies of the play, the experience is largely due to the magnificent and dynamic projections (one of the best I’ve ever seen) that light up the stage and create excitement.  Scenic design by Robert Brill, projection design by Hana S. Kim, and sound design by Jake Rodriguez create the closest thing to a a non-VR immersive experience in theater.

The Great Leap is full of hilarious and poignant moments, and as we learn the real story behind of Manford’s  visit to Beijing we can sense that the sweep of history is a play-by-play of unresolved questions, family love, lost opportunity, and possibilities of change.