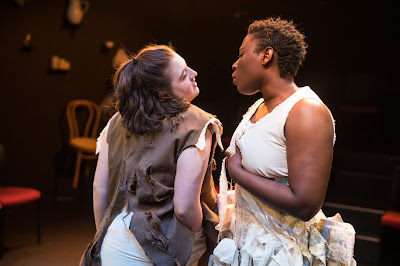 Turn the pages back through the ages
What are their names? Just you and I...
Love's Roundabout from the movie La Ronde (1950)

In his charming 1950 film La Ronde, director Max Ophuls lets us peek at the endless waltz of desire, need and connection that is so very basically human, male or female.

Although the script calls for five women and five men, Cutting Ball Theater’s production of La Ronde features two women, EIla Ruth Francis and Jeunee Simon, as the ensemble of all 10 characters to illustrate a new dance of sex, power, and sheer desire.

In Cutting Ball’s tiny box theater on Taylor St, the audience sits in a circle as the two actors sexually shapeshift in and out of the 10 roles. Like Tinder-swiping voyeurs, we watch the Whore hook up with the Soldier, the Soldier with the Maid, the Maid with the Gent, the Gent with the Wife, the Wife with the Husband, the Husband with the Lil’ Miss, the Lil’ Miss with the Poet, The Poet with the Actress, the Actress with the Count, and the Count with the Whore with whom the story begins.
Francis and Simon both play the light and shadow of each character under the precise and playful direction of Ariel Craft (also the new Artistic Director of Cutting Ball), moving in sync with the equally exact lighting (Cassie Barnes) and sound (James Ard) cues such as drapes being opened or a snorer wheezing next door. Simple costumes (Morgan May Louie) hang on the walls to allow quick character changes.
With powerful pas-de-deux of acting and movement, Francis and Simon reveal how each character is changed by sexual interaction, from trampled innocence to jaded disappointment. Especially amusing is Simon’s stuttering Count as he tries to regain composure after an interlude.
Cutting Ball's La Ronde offers the most explicit sex you can have on stage without nudity or physically obvious acts. With the speed-dating pace of the play not offering much time to think, I just let my body react. La Ronde invites the audience to be as aroused or put off as they wish; it makes no difference because the dance will continue anyway.