Family Baggage Carried in Her Portmanteau 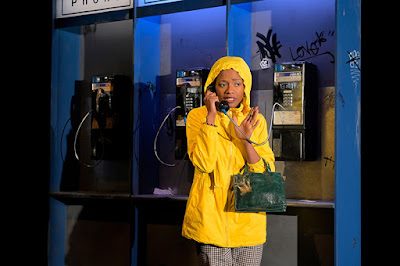 In Her Portmanteau, Mfoniso Udofia shows us how the threads of the fabric that we know as FAMILY can be frayed, stretched, broken and ultimately woven back together with a resilience born of loyalty, memory, tradition, humor and love. The story obviously resonated with director Victor Malana Maog for him to present such a crisply paced and moving interpretation.

Part of Udofia's nine-play Ufot Family Cycle, Her Portmanteau begins as the frantic and guarded Nigerian woman Ibiasisi (Eunice Woods) desperately tries to reach someone via a frustrating pay phone at JFK airport (see banner photo, above). She is greeted by a woman bundled up for a New York winter who is there to pick her up; it is her half-sister whom she hasn’t seen for decades and who is now a fully American 30-year-old with her own life and apartment in New York City.  Still filled with suspicion, Ibiasisi resists but reluctantly accepts the offer of a ride.

The rest of the play takes place in Adiaha’s tiny apartment which is full of character and warmth. David Israel Reynosos’s set design is simple and effective; you feel right at home among the furniture, paintings and family portraits.


We soon meet Abasiama, the mother of both Ibiasisi and Adiaha but with different husbands. She greets Ibiasisi in the Nigerian language Ibibio and just as seamlessly flows into American English with her other daughter Adiaha.

What seems to begin as a simple family visit deepens into an uncovering of deep and long-held beliefs, hurts, betrayals and hope. Guarded hearts, stubborn wills, the vagueness of memory and the persistence of imagination weigh down communication. The expectations of what it means to be a mother, to be a daughter, and to be free are challenged and argued, and frustration flies around in both languages. There is no need to translate the dialog verbatim. The three characters bump around the small apartment, the air sparking with uncleared anger, old feelings of abandonment and deep-rooted grief.

Kimberly Scott fills the character of Abasiama with a mother’s stubbornness, righteousness, concern and humor. Her wisdom is to be valued:  “I did not live to this age to know nothing.”
Aneisa Hicks as the younger sister Adiaha is likable, vulnerable, friendly, patient and open-minded; she is the catalyst for communication, providing a space and means for dialog. And Eunice Woods brings us the stranger-in-a-strange-land Iniabasi who is at once reserved and opinionated, especially when she claims the superiority of an “elder” over her younger sister.

When the daughters leave to go for some dinner, Abasiama recognizes Iniabasi’s suitcase as the very same one she used in Nigeria years ago and opens it out of curiosity. What she finds inside (no spoilers here) is an overwhelming treasure that aligns her thoughts and memories with her deepest heart.

As the reality of her discovery sinks in, Abasiama melts into a swirl of memories and regrets and can only utter sounds of joy, surprise, delight with few words. She realizes that grown-up Isiabasi is still the child she left many years ago, a child who needs her mother. When Abasiama realizes the pain she has caused, she cries for forgiveness. Scott is remarkable as a mother who is  turning her soul inside out, spilling it out in sobs, and reaching into years and years of history. Who cannot relate to such outpouring? Love and reconciliation are conveyed by images and actions, not words.

Udofia’s compact, simple script is as  tightly woven as a meticulously designed and embroidered garment. With the musicality of both Nigerian and English languages, the arc of communication grows from chaotic separation to rich connection.

The beauty of Her Portmanteau is how it so easily resonates with our own familiar experiences, making it a truly engaging theatrical interaction.

Her Portmanteau
Written by Mfoniso Udofia
Directed by Victor Malana Maog
Through March 31, 2019, at ACT's Strand Theater, 1127 Market Street, San Francisco CA. Tickets range from $15-$110, and are available at www.act-sf.org

*Member of Actors’ Equity Association, the union of professional actors and stage managers in the United States