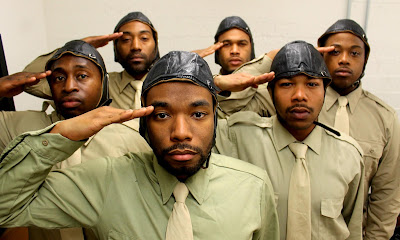 The play begins with three elderly gentleman at a banquet in the late 1980s reminiscing about their WWII experiences as members of  the first all-black Army Air Force squadron of fighter pilots known as "The Tuskegee Airmen" or “The Fighting 99th.” The men are joined by their younger selves who bring the memories to life, laying out a predictable structure of back-and-forth reminiscing and staging that keeps the play at the level of storytelling than drama.

Like weathered fisherman bragging about their catches, Elder Clarke (amiable Gift Harris), Elder Nolan (thoughtful Todd Risby) and Elder Leon (distinguished Thomas Robert Simpson) banter and argue about details of flight missions, aerial maneuvers, killing “Jerries,” losing friends and missing loved ones. Despite the racist military rules (such being denied admission to the white officer’s club) that blocked their full participation on the base,  they could be themselves amongst each other, away from the stateside clutches of Jim Crow.

The six young soldiers--Clarkie (Luchan Baker), Roscoe (Ron Chapman), Nolan (Brandon Callender), Buddy (Donald Ray Antoine), Leon (Devin A. Cunningham) and Othel (Joseph Pendleton)--look sharp in their pressed khakis as they argue, chide, and laugh like the tight band of brothers they are. They engage in some aerial missions (hard to stage dynamically), argue about why the hell they are there, and snap to attention when General Lucas (a convincing Gene Thompson) enters the room and tells them that he wants to up his military stars to three if the “experiment” (about whether black men can make good fighter pilots),” for which he is “putting his ass on the line,” succeeds. Except for the really fun and hopping “Jitterbug Drill” and Nolan’s meeting with his Italian girlfriend Pia (Margherita Ventura), who establishes hat yes, they are fighting on the WWII Italian front), the first act circles around the runway without ever taking off, and a few heads were nodding in the audience.

Act II manages to lift off into the wild blue yonder and seems like a different play. There is more dialog, intent, desire and purpose. Two good-natured white soldiers--Dave Whitson (William Robert Caldwell, awkward but well-meaning) and Roy Truman (Kyle Goldman, with a Jimmy Stewart aw-schucksness)--pay a friendly visit and are immediately suspected by the Eagles. One of the Eagles pulls out a bottle of special cognac, but the proper civilized “savoring” quickly descends into a pass-the-bottle swill fest. The Black Eagles shout their pride, with Truman and Caldwell declaring themselves the "White Eagles". It seems like one team, but the sad reality is that the white pilots have far less training than the blacks yet have juicier, real combat flight assignments.

The camaraderie of the black soldiers brings a lot of energy to the scenes, and I wish the play had more of that. Some of the actors were strong and others not, with the effect being like high performance tires with small leaks. The cast has potential but the script is a scaffolding of historical trivia, which does not allow for momentum or exploration. But as an homage to the heroism of the Tuskegee Airmen, Black Eagles is an enlightening slice of American history.

Director L Peter Callender, who performed in the original production of Black Eagles years ago, brings much love to this earnest production which unfortunately never quite gains the altitude of powerful drama.