The Wickhams: Christmas at Pemberley

Even the happiest of holidays can stress out any family, including the residents of the Pemberley estate featured in Jane Austen’s 1813 novel Pride and Prejudice. What an engine of human dramedy is this novel, inspiring numerous interpretations (including the film Bridget Jones’ Diary).

In The Wickhams: Christmas at Pemberley, playwrights Lauren Gunderson and Margot Melcon have again revved up the Austen engine to create another holiday spinoff like 2016’s Miss Bennet: Christmas at Pemberley. The Wickhams takes place at the same time as Miss Bennet, except in the downstairs realm of the servants who work hard to create, manage and execute the holiday magic that appears so effortless to “upstairs” folk like Mr. Fitzwilliam Darcy (David Everett Moore) and Mrs. Elizabeth “Lizzie” Darcy (Melissa Ortiz) and guests.

Downstairs is the domain of Mrs. Russell (​Jennie Brick),  the cook and “operations manager” who bustles and fusses to keep the house running smoothly with the help of the footman Brian (August Browning) and new maid Cassie (Neiry Rojo). There’s so much to be done: orange biscuits to be baked, meals planned, wreaths assembled, decorations prepared, boots polished, and the live evergreen tree cut down and hauled inside as part of the new German novelty in holiday tradition.


The routine moves like clockwork until a wrench is thrown into the gears, the wrench being the “ne’er do well” George Wickham (a wonderfully scurrilous Kenny Toll) who appears unexpectedly at the servants’ door at Pemberley even though he has been banned from the premises for deceitful and conniving actions regarding his relationship and bargained marriage to Lydia (Madeline Rouverol), the youngest Bennet sister who lives in a ditzy whirl of balls, pretty dresses, and flirtations with men. Lydia has come to visit her sister Lizzie without George, unaware that he’s hiding out downstairs. The whole play is fun and farcical as the staff tries to keep George and the chaos he brings away from the family.

Downstairs is like the backstage before opening night. It’s also an escape for Lizzie and Lydia to literally let their hair down, explode with emotion, and munch on one of those delicious orange cookies. (MTC would do well to sell those cookies in the lobby!) And the whiff of budding romance and a new future for Cassie and Brian is heartwarming.


One thing that MTC does well is the dramaturgical research (Laura A. Brueckner) needed to create authenticity. Courtney Flores’ meticulous costume design brings form and color to the actors’ movements, and Wilson Chin’s scenic design is packed with intriguing details to fill in the experience of working among the servants. MTC displays the research in engaging lobby exhibits to depict life just prior to the Industrial (and thus social) Revolution in England. An innovative and fun touch were the bottles of scents the characters might have experienced in the early 1800s: you could smell the spices, laundry soap, and even brandy.

All performances are solid, with Mrs. Russell, Brian, and Cassie maintaining sanity while George and Lydia rant hysterically and Mr. Darcy and Lizzie strive to maintain decorum.

This latest Christmas jaunt into a secret corner of the Pemberley estate makes for a delightful time at the theater, leading me to wonder what new story will come next year.

The Wickhams:  Christmas at Pemberley 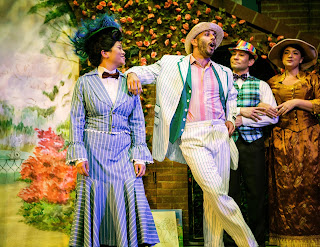 Crazy for You: Gershwin Galore

If you also like lots of singing and dancing and don’t mind an insipid, outworn plot, then you may enjoy Bay Area Musical's production of Crazy for You, a mishmash of Gershwin songs from the 1930 Girl Crazy and other productions. For this "New Gershwin Musical Comedy" from 1992, it’s pretty dated.

Under the direction of Matthew McCoy, BAM players put their hearts and hooves into this production that was unfortunately weakened by the flimsy premise, missed comic timing (where throwaway humor was really thrown away), audio problems, and mismatched energies of some performers. But then again, it’s quite the feat to capture that big Broadway show feel on the Alcazar stage.
Bobby Child (Conor DeVoe) is a bored rich kid who’s gotta dance and tries out for the bright lights, big stage, and Broadway thrill of the Zangfeld Follies. When dispatched by his greedy mother Irene Roth (Mary Gibboney) to foreclose on a property way out West in Nevada, he meets his match in Polly Baker (Danielle Alitzio), the feisty daughter of vaudeville actors who fights to keeps the old hotel, stage, and post office running. Surprise! Love triumphs over greed but not without some mishaps, some funny, some tedious.


Let’s talk about what’s good. First of all, the dancing! Matthew McCoy and Danielle Chaiken do justice to Susan Stroman’s choreography for the original Broadway production. The chorus girls are a collection of quirky personalities who dance and sing in sparkly and fun costumes designed by Bruce Jennings and Ge Jia. They are a joy to see, with special standout by Danielle Chaiken as Tess, keeping a snappy wryness to her everygirl character. The chorus of “cowboys” is equally delightful, and when the entire chorus moves together it’s a dazzling spectacle.

Conor DeVoie is a exubeant dancer, comfortable in his body, and fun to watch. He has a knack for physical comedy, from his facial expressions and doubletakes to the goofy, Marx Brothers-inspired “mirror” scene he has with Bela Zangfeld (Tony Michaels). Danielle Alitzio as his counterpart Polly is equally adept with the steps but somehow kept within her own sphere of energy. Her rendition of "Someone to Watch Over Me" didn’t have the soulful yearning this song was made for. As good as she was with song and dance, she seemed uncomfortable.

The main weakness is the play itself. Despite the energy of some talented people, the story is flat-footed, clumsy and at times boring. Although there are things to enjoy in this production, crazy for it I am not.