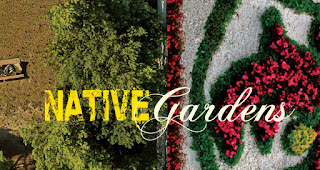 
Even before the play begins, the set of Karen Zacarias’ play Native Gardens tells a story.

The backyards of two townhouses sit side by side. On the left is a neat, orderly garden and patio, with furniture, flowers, and grass arranged just so, suggesting that whoever lives there lives by the rules. On the right is a similar structure that needs TLC but it is appealing in its unkempt wildness, including an impressively real-looking huge oak tree overhanging the neighbors' yard. Big kudos to set designer Andrea Bechert  for an amazing feat of stage construction, with real mulch, flowers, and feel.

Native Gardens explores how we protect our personal spaces with protective but not necessarily impermeable boundaries, something that any homeowner realizes about the realities of property lines, laws and history.

Tania, a young mother-to-be (played with earnest optimism by Marlene Martinez), emerges from the back of the shoddier house. she is soon joined by her husband Pablo, an ambitious young Chilean-American professional played with an earnest nervousness by Michael Evans Lopez.. Each is dreaming of what can be done with their new space: Tania envisions a native, pesticide-free habitat that will draw indigenous birds, bees and bugs, while  Pablo, in an impulse to impress his new boss, has invited the entire department over for a BBQ only six days away. After a moment of panic, the decision is made to have the party catered in the new yard which can be fixed up well enough except for the unsightly chain link fence that separates their space from the neighbors.


As good neighbors, Tania and Pablo seek the approval of their established neighbors Frank (a composed yet finicky Jackson Davis) and Virginia (an inviting yet fierce Amy Resnick). The four get together in Frank and Virginia's yard, and usual chit chat unveils differences of opinion and attitude, as when Frank reveals how he douses his garden with pesticides amid other finicky actions to prepare for the annual garden competition, behavior that is anathema to Tania in sense of protection for the environment.

All four agree that the unsightly fence has to go, until good intentions are trumped by hard data when Pablo and Tania confirm that their property boundary legally extends into the neighbors yard--right through Frank’s cherished garden. This dilemma strains neighborliness to the breaking point, and suddenly the fence line escalates into a border dispute, creating fertile ground for humorous attempts to thwart the opposition. For example, Virginia attempts to cut down the beautiful oak tree, and Tania tries to keep peace within reason. Hilarious yet tense confusion and disagreement abound, masterfully directed by Amy Gonzalez, and the once-friendly neighbors lock horns until an event of life and death proportions puts property concerns in their perspective.

With a solid, well-crafted and fun script performed by top-notch actors, Native Gardens shows us how how our quickly-formed differences can dissolve  in the realization that we are all in this together.