A Dark Night of the Soul 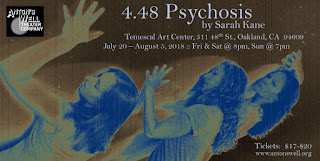 
The demons come out at night.

You may know these demons, the ones that wake you from sleep and swirl around you in a unstoppable whirlwind of anger, remorse, panic, pain and confusion.

Playwright Sarah Kane knew them all too well. In 4.48 Psychosis, written shortly before her suicide in 1999, Kane expressed her interior world not with pat narrative, three-act structure, or even dialog; instead, her sparse, 24-scene script is a streaming fugue of images, impressions, and snatches of conversations that comprise the mind-churning prelude to breakdown.
Anton’s Well Theater Company has brought 4.48 Psychosis to a small studio at Temescal Arts Center in Oakland. Director Robert Estes and choreographer Bridgette Loriaux create a visceral and verbal experience where three brilliant performers (Anastasia Barron, Jody Christian, and Adrian Deane) dance, interact, intertwine, explode, recoil and literally throw themselves against the wall while uttering lines like “Built to be lonely/to love the absent/Find me/Free me/from this/corrosive doubt/futile despair/horror in repose…” or “What do you offer your friends to make them so supportive?”

4.48 Psychosis is no easy piece of theater; there is no neat resolution or comic relief. It is an intense glimpse into a very dark night of the soul rendered beautifully.

A Hunchback Full of Heart

The Hunchback of Notre Dame: The Musical

Like the stony interior of the renowned cathedral itself, The Hunchback of Notre Dame: The Musical is suffused in a human darkness that first flowed from Victor Hugo’s pen and many years later coursed its way to becoming a Disney musical animation. Although rich with moving songs, the show never made it fully to Broadway and, like Quasimodo, was not completely formed.
Set in medieval times, it’s the beautiful, sad story of Quasimodo, the bastard orphan of a gypsy and a life-loving but aimless young man who, at his death, beseeches his brother Frollo, the clerical caretaker of Notre Dame, to care for the child. Appalled by the child’s physical deformities, Frollo sees it as a cursed, aberrant monster that must be hidden away at all costs, and in what better place than the dark sanctuary recesses of the cathedral.

Closing its season, Bay Area Musicals brings a fantastic, talent-rich production of The Hunchback of Notre Dame: The Musical to the Victoria Theater in San Francisco. One thing that distinguishes BAM is how its cast and crew consistently generate an energy of collaboration and enthusiasm for their shows, and Hunchback is no different.

Opening night ended with a rousing standing ovation for the performers and artistic team, with the only challenge being some inconsistent lighting during the performance.

The play’s undercurrent of religious fanaticism masking sexual repression, of loneliness and rejection, of cruelty and fear, are the kinds of things that would make anyone, much less a child, lie awake at night. But the musical does take on these topics, expressed in lovely songs like "The Bells of Notre Dame," "Out There" and "God Bless the Outcasts." In the darkness, there is, like Notre Dame's beautiful circle of stained glass, some glimmer of hope,kindness, acceptance and love.
Clay David as Frollo has a Christopher Lee kind of chilly intensity, looming like a clerical cobra with his severe frock and wildly stern expression; it is always a pleasure to see this finely trained and experienced actor perform.

Tormented by his attraction to the sensuous gypsy Esmeralda (played with heart, sultriness, compassion and a beautiful voice by Alsyis Beltran), Frollo reconciles his confusion by declaring witchcraft and the ultimate punishment of death to Esmeralda. "Hellfire," with its liturgical strains of "kyrie eleison," speaks of the rigid good-evil, heaven-hell, righteous-sinning dichotomous worldview of Frollo and the medieval world he resides in.

Alex Rodriguez, another Bay Area treasure, is a gentle, loving Quasimodo who can barely speak but whose interior voice soars in songs like "Heaven’s Light." Friends with the stone gargoyles that guard the cathedral and the huge bells he names as friends, Quasimodo’s yearning for, and right to, love and be loved is what touches our hearts.

A delightful disruption is Trouillefou Clopin, the extreme and ebullient trickster played so entertainingly by Branden Thomas.

The set (Matthew McCoy) suggested, as well as one can on a tiny stage, the cavernous cathedral and the busy town square. The costumes (Brooke Jennings) were colorful, creative and well-designed, and the orchestra (Jon Gallo) sustained the pace, in some cases competing a little too much with the singers. There were some technical glitches in lighting and miking that will most likely be worked out in subsequent performances.
This story about outcasts, oppressors and enduring love is a sad, timely mirror of our current political situation where the idea of sanctuary is seen as a threat and not redemption.

All photos by Ben Krantz