History through a Distorted Lens

If you question the narrator of MTC's production of Thomas Bradshaw'sThomas and Sally,  the controversies about "revisionist history" stirred up by this play can be put into perspective, sort of.

Martha (Ella Dershowitz) and Karen (Rosie Hallett) are college roommates in a typical modern dorm room, with two twin beds, desks, closet door, etc. that soon have different uses as the play unfolds. Martha is raving about the gorgeous, shirtless athletes she watched earlier in the day as she hunts for her vibrator which was casually "borrowed" by Karen who is now struggling with a paper she needs to write about Thomas Jefferson.  It turns out that Martha's last name is Hemings and that she is a descendant of Sally Hemings, the slave who bore several children by Thomas Jefferson. And boy, does Martha have stories to tell, since she knows "everything" about that topic, but in an Entertainment Tonight - meets American History 101 gossipy sort of way.


Martha's storytelling is not linear and moves quickly between the present and 18th century America, with actors doing double or triple duty to portray multiple characters entering, exiting, and interacting, and set pieces being rearranged in a crisp and rapid choreography of stage design (kudos to Sean Fanning). The slavelife saga of Sally's mother Betty involved multiple sales and many children with different men; in one birth scene, "babies" (plastic dolls) are "delivered" one after the other in quick sequence, an amusing and effective trick to compress the passage of time. This same trick is later used to depict the many children of Thomas Jefferson with his wife Martha. A lot happens, and some of it may be historically accurate (Bradshaw did extensive research for the play), but remember, it's story told by someone from the future looking at events through her subjective lens.

The conflicted (he owns slaves, but thinks they should be free?) and contemplative Thomas Jefferson is earnestly and passionately played by Mark Anderson Phillips who engages in anachronistic banter with John Adams and Ben Franklin as if they were college buddies who "get to do all the fun stuff" when it comes to shaping the emerging new government.

The meeting of Thomas and Sally, so wonderfully played by Tara Pachecho, buzzes with an attraction that becomes pretty juicy and intense, depicting the two as passionate and creative lovers more than master and slave. Whether this is true or not is not at issue: Martha doesn't hold back on the vivid descriptions of what may have happened, although it is probably more of what she wishes for in her own romantic life.


Thomas and Sally  tries to titillate with explicit details and a sprinkling of some facts to show how some parts of collective memory are shaped by the zeitgeist.  Martha and Karen never leave the dorm room, nor do they really learn anything new, from what went on with Thomas Jefferson and Sally Hemings. 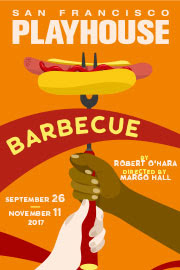