HeLA: Connection, Communication, and the Legacy of Love 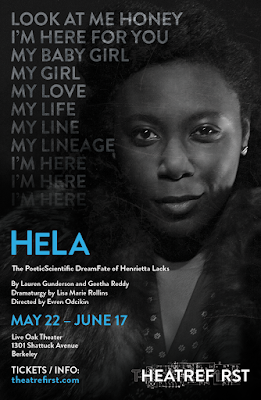 "Tell me a story," a young girl asks her mother in a sunny home kitchen. The girl is Deborah Pullman, now grown, recalling a distant memory before her mother Henrietta Lacks died of cancer in 1950 but whose cells, harvested without consent by Johns Hopkins clinicians, continued to thrive and divide long after Henrietta’s death. These cells became an entity called HeLa, and it was quickly forgotten whether they belonged to Henrietta Lacks, Helen Lane, or anyone for that matter.
There are many ways to approach this story of how the thriving cells of an ordinary African American woman with cervical cancer in the early 1950s in Baltimore made it possible to research phenomena that led to the development of the polio vaccine, in vitro fertilization, cures for several diseases, and the backbone of bioresearch industries like Genentech. The story was chronicled in the book The Immortal Life of Henrietta Lacks by Rebecca Skloot, recently adapted into an HBO movie with Oprah Winfrey. The book and film address the who, what, when, where of the experiences, confusion and struggles of Henrietta’s family, especially her daughter Deborah, as they deal with the reality of Henrietta’s legacy. There is a lot of information to process if facts are the only guide.

Or you could choose to find the thread of meaning, the story beneath the story, to present the WHY of this story that makes it so compelling, universal, and beautiful. This is what TheatreFirst has done with its current production of HeLa: The PoeticScientific DreamFate of Henrietta Lacks, written by Lauren Gunderson and Geetha Reddy, and the result is a remarkable journey through time and space that shows the legacy of love and connection through generations, with Henrietta as the constant point of reference.

Don't expect a literal retelling of the story. This production of HeLa is more like a dance of character interactions, with the two main characters of Henrietta (played splendidly by Jeunee Simon) and her daughter Deborah (Desiree Rogers), a “motherless child a long way from home,” still seeking connection and answers.

Henrietta’s cells persisted after death, and in this play Henrietta is a person, a consciousness, and a presence who experiences, and reacts to, the situations the HeLa cells went through. Jeunee Simon conveys a range of emotion as Henrietta, there at Jonas Salk’s discovery of the polio vaccine; on the trip to space with the patriotic Russian canine cosmonaut; in the doctor's office sharing the joy of a couple who has just learned that they at last could have a child in vitro; witnessing the pharma exec’s thrill at the profit made by selling HeLa cells.

The strong ensemble cast greatly expanded the scope of time and place. Sarah Mitchell nailed the cordial but emotionless technician as well as the wildly patriotic Soviet dog that went into space, a hilarious part of the show, with the dog conversing and barking its purpose to Henrietta. Richard Pallaziol was versatile as the detached doctor, the excited Jonas Salk, the profit-conscious pharma exec, and even the gee-whiz young father amazed at having a baby in a test tube. Khary Moye had great heart as Henrietta’s loving husband as well as a stubborn teenager and a scientist. And Akemia Okamura balanced concern with practicality as the scientist who tells Deborah about the reality of her mother’s cells.

But it is the dynamic interaction between Desiree Rogers as Deborah and Jeunee Simon as Henrietta that fills heart and soul of the play as the two move toward each other. "I don't know how, but I can see you!" is a recurring line spoken by Henrietta and Deborah that compresses time, space and circumstance into powerful emotions, as when Deborah first sees the living, moving cells of her mother, projected on the white lab coats of the scientists, and realizes that they were her mother's. But there is confusion. Is it my mother? Are the cells my mother? It is about recognition of where one belongs in the grand scheme of things.

The story of Henrietta Lacks is about more than one person. She was the black marginalized patient in the 1950s who represents other marginalized patients today: the elderly, the mentally ill, the poor, the sick, and even the dying, too often dismissed by the euphemistic efficiency of medicine, business and politics that too easily sidesteps humanity. As Henrietta realizes, it is ok to "take" but not "care" and too easy to say “take care.”

Like the cells themselves, the play HeLa is a living work in progress, with every show followed by a discussion. You still have time to see this show before June 17--don't miss this opportunity.
……………………
HeLa: The PoeticScientific DreamFate of Henrietta Lacks
By Lauren Gunderson and Geetha Reddy
Dramaturgy by Lisa Marie Rollins
Directed by Evren Odcikin

All photos by Cheshire Isaacs