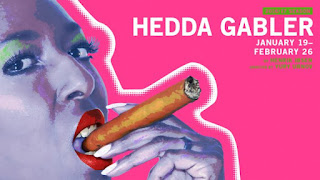 Henrik Ibsen’s Hedda Gabler presents one of the most challenging, complex roles for an actress to play.

Bored to death by married life with the tediously academic George Tesman, she yearns to smash the clockworks of societal expectations but, not knowing what she really wants, continues to pace back and forth in frustration, anger, and fear.

Directed by Yury Urnov (Ubu Roi), with condensed translation by Paul Walsh, this Hedda taps into an emotional chaos that boils beneath the veneer of polite 1890’s society.

All is well in the household as long as expectations are met and implicit rules followed. Aunt Juliane (Heidi Carlsen) and her nephew George Tesman (Francisco Arcila) have a bond as comfortable as the old pair of slippers she saved for him while he was on his six-month bookish honeymoon with Hedda Gabler. Arcila puts the limited and not really useful George into motion, with the catchphrase of “imagine that” fitting for someone with such limited imagination and passion.

Aunt Juliane (a prim and prodding Heidi Carlsen) sports the pretty hat (a whimsical spot of color thanks to costume designer Alina Bokovikova) that Hedda knowingly and unkindly dismisses as the maid’s old hat. Indeed, it is the maid Berte (a beleaguered and stressed out Michelle Drexler), who gives us an inkling that all is not as usual in the household, especially with a callous new mistress who is impossible to please.

When Thea Elstead (Carla Pauli, projecting frantic steadfastness) visits and proclaims that Ejlert Lovborg is in town, and that she has helped him finish his book, Hedda’s claws come out, ever so insidiously, and we get glimpses of how dangerous and manipulative she is. We deduce that Ejlert was once in a tortured love relationship with Hedda, but now has broken free of the obsession with drink and reckless passion to live a “clean and sober” life.
Or so he thought. Upon seeing Ejlert again, Hedda knows his demons and coaxes him to celebrate with a drink. He protests but gives in to Hedda, taking a drink, and another, and another with Thea pleading all the way. Kunal Prasad (the remarkable Poet in A Dreamplay) is a larger than life Ejlert Lovborg, dragging a huge pitchfork across the floor like a ball and chain, making a painful grating sound. This Ejlert is more of a caricature, a device for Hedda to manipulate and discard as she has done before.

Britney Frazier brings us a Hedda who, like a panther or a snake, moves deliberately in its own realm, no matter how small that realm is. She is General Gabler’s daughter who wields a mean pistol even if she is only “shooting into the sky.” She banters with the ubiquitous Commissioner Brack (Steve Thomas), whose stature and Elmer-Fuddish demeanor belies the entitled and conniving creep that he is. Hedda muses on the misery of marriage, of taking a train ride with the same person your whole life. What if someone along the way comes into your car, muses Brack, insinuating that he complete the triangle with her and George. Hedda and Brack sit in chairs at both ends of the stage, volleying suggestions, comebacks, and vague propositions back and forth like a tennis match. Sensing that Brock is an adequate but ignorant player, stupid in fact, Hedda is all the more humiliated when she is eventually trapped in his corner.

Hedda's willful world is crumbling. Ejlert, wracked with remorse for carelessly losing his life's work, does not end his life as beautifully as Hedda wished. She is not part of the bond George and Thea form to recreate Ejlert's book. Brack is poised like the rooster in the hen house to her private realm. Trapped, she seizes her instrument of art-- her father’s pistol--to do the one creative act that is hers alone.

Here Urnov makes a very creative decision: A single gunshot is not enough for Hedda. She blows it all apart, powerfully staged as an explosion. We see Hedda as who she really was all along – the strutting, sleek and stunning panther in her glorious bareness, flicking ashes on the life she escaped, and promising to keep on disrupting order.


For a tiny stage with no walls, the set designed by Jacquelyn Scott conforms to the pace of the play. Planes of scrims divide the space and create depth. The mobile set is rearranged by sprightly stage hands wearing bowlers, skipping to contemporary and somewhat apropos songs like “Tiptoe through the Tulips” or “La Vie en Rose” from the whimsical sound design of Cliff Caruthers. Hamilton Guillen’s strategic lighting follows the emotional flow of scenes; his use of silhouettes adds even more dimension to the limited space. For the “burning the child” scene, light to suggest fire offstage would have heightened the effect of Hedda’s destructiveness.

Cutting Ball’s production of Hedda Gabler may not appeal to Ibsen purists, as much was done to alter the script to make it more “contemporary.” But there’s a wonderful energy to follow through the play that may spark some new insights. Imagine that!

The California Scrub Jay visits my backyard feeder. He is pretty insistent on getting the suet. Wait for it..https://youtu.be/Wgp4RI_Wt9s
at January 14, 2017 No comments: