Audiences booed Anton Chekhov’s “The Seagull” at its premiere in St. Petersburg in 1896. Its head-on foray into the nature of art, creation, society, and relationships was not expected or understood. The characters in “The Seagull” churn in their own spheres of longing in a world that is not linear or tidy. Love is unrequited, failures ensues, dreams are dashed, and souls collide.

But, like islands born from lava in combat with the sea, new audiences emerged to embrace new forms.

This energy of creation sparks Pan Pan Theatre Company’s production of “The Seagull and Other Birds.” Like a seagull that patrols the coast to find unlikely sources of food, this award-winning Irish theater company uses Chekhov’s play as a point of departure to discover “other birds” — other forms of inspiration. Pan Pan Theatre Company scavenges from cultures across time and space — unexpected and fun images that reverberate in your memory, images that must be perceived but not over thought, as from a strange and compelling dream.

Upon entering the theater, we see all cast members on stage, warming up and stretching in pink and white ballet garb, tutus and all, creating an ironic image for what’s to come. We are given a sheet with the lyrics to “I Don’t Like Mondays” by the Boomtown Rats and are asked to sing along, dissuading one from accepting the kind of same-old, same-old feeling that Mondays bring. This is going to be a new ride, a kaleidoscope of movement, dance, erotic tableaus, rap, Luche Libre masks, and even a type of reality show where audience members are selected to interact with the cast on stage which becomes a dynamic canvas of innovation.

The seagull is not the only bird. “Other birds” loosely suggest points of divergence marked by hand drawn and hand held posters. There is “The Seagull,” Chekhov’s metaphor for failed love and aspiration. “The Shag” (Cormorant). The indomitable Arctic Tern. The huge and opportunistic Herring Gull. The “other birds” are facets or essence of characters: the dreamer Nina, literally running away from tethers, the despondent playwright Konstantin, the jaded author Trigorin, and the dark Masha —are present as suggestions of traits and dynamics.

Seeing “The Seagull and Other Birds” is a visceral, kinetic, and chaotic experience that seems oddly comfortable in this moving, hyperlinked, fragmented, yet oddly cohesive world.

‘Seagull and Other Birds’ can be seen for one more performance on May 28, at the Cowell Theatre. For further information click here.
at December 05, 2016 No comments: 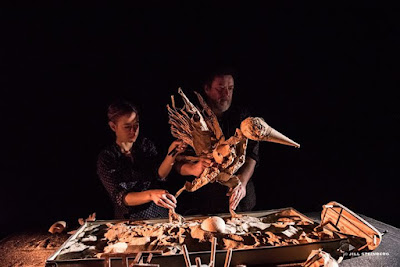 “Birdheart” has the simplest of beginnings: a single egg lit warmly on a table covered with sand. Lovely, evocative, uncomplicated string music fills the room. We hear the sound of gentle waves lapping a shore. We watch intently, not knowing what to expect.

Soon, the egg begins to crack and move. Something is trying hard to get out. It is not a bird but a person, or rather, an animated sheet of brown wrapping paper that is shaped and manipulated to look and move like a person, much as a passing cloud might look like a horse.

The forces that do the shaping and moving are puppeteer-musicians Julian Crouch and Saskia Lane. Their presence is evident, not hidden in black like Noh theater koken, and the audience marvels and applauds at the things they do with this intriguing medium.

The paper person struggles to gain footing and soon realizes it is alone. It finds a small table and chair on the beach and arranges them to create an invitation to tea, complete with two small cups. We feel this creature’s loneliness, its sense of being earthbound and heavy. It seems stuck until it is enlightened (literally, a backlight throwing a shadow) to realize it has a tiny bird in its heart. The joy is palpable as the paper creature lifts up and is pulled down, lifts up and is pulled down until it finally transforms into a bird, from the same amazing piece of paper.

The bird gains wings which are fragile, skeletal paper. The design was inspired by Chris Jordan’s harrowing photos of baby albatrosses who starved to death with crops full of plastic detritus that their parents found and fed to their chicks.

The bird lays a single egg, tries to brood it but gives up. It flies away, abandoning the egg, and we are brought back to the beginning with single egg sitting in the spotlight. And I cried.

“Birdheart”reminds us of the profound simplicity of form, story, and emotion in classic Polish animation.

After the performance, Lane and Crouch met with the audience to answer questions about the source of inspiration (“we tried to be open to the accident of something, to be in chaotic collaboration with the world”), logistics, material (ordinary brown wrapping paper), music (by Saskia Lane, Julian Crouch and Mark Stewart) and meaning that shaped the piece, and even invited the curious to see the puppetry design up close. They plan to bring “Birdheart” to other countries, inviting local musicians to perform with that country’s instruments and music, making it a truly universal endeavor.

Prior to the performance, Lane and Crouch playfully turned each other into puppets, and performed a banjo bass duo. How they did this is a surprise worth waiting for.

Magical and intriguing, “Birdheart” helps us to believe that an ordinary brown paper bag can dance, fly, and have a soul that resonate with ours.

This review was initially published in Theatrestorm.com.
at December 05, 2016 No comments: